Platform work in East-Central Europe: reporting and organising in an emerging field 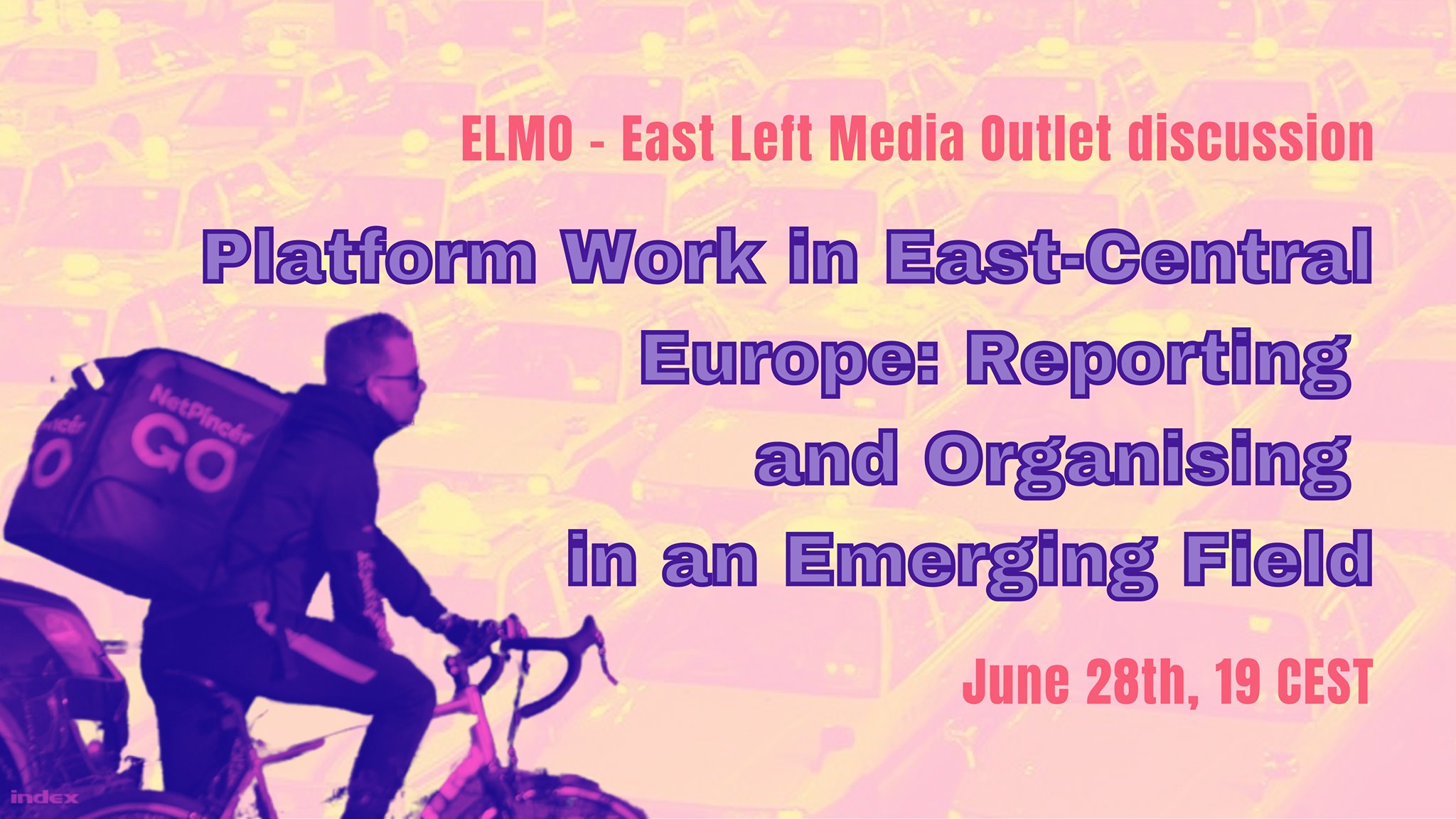 On 28th June at 7 pm CEST time, East Left Media Outlet - ELMO invites you to participate in an online roundtable about platform-based gig work in Central Eastern Europe. The event will be live-streamed on the organizers’ Facebook pages and you can also join the Zoom meeting here: https://zoom.us/j/96592804162
(Meeting ID: 965 9280 4162).

𝐏𝐥𝐚𝐭𝐟𝐨𝐫𝐦 𝐰𝐨𝐫𝐤 𝐢𝐧 𝐄𝐚𝐬𝐭-𝐂𝐞𝐧𝐭𝐫𝐚𝐥 𝐄𝐮𝐫𝐨𝐩𝐞: 𝐫𝐞𝐩𝐨𝐫𝐭𝐢𝐧𝐠 𝐚𝐧𝐝 𝐨𝐫𝐠𝐚𝐧𝐢𝐬𝐢𝐧𝐠 𝐢𝐧 𝐚𝐧 𝐞𝐦𝐞𝐫𝐠𝐢𝐧𝐠 𝐟𝐢𝐞𝐥𝐝 In the CEE peripheries of the EU, casualisation of work and degradation of employment relations within the overall context of recession and crisis has been common well before platform companies, such as Uber, emerged. The Covid-19 pandemic deepened an already pervasive economic crisis, as both unemployment and social inequalities increased and it suddenly highlighted the significance of the mostly invisible platform-based gig work for the economy and society alike.

More and more worker vulnerabilities are unveiled, as platform work, both in the form of on-location platform companies such those in charge of food delivery, but also online platform companies, such as Upwork is becoming more visible to the broader public. These bring to public attention the negative effects of platform work on the labour law infrastructures and social welfare of workers, as well as on the overall social cohesion of CEE societies where the social fabric has already been torn apart by rampant privatisation, induced unemployment and mass outmigration. Against this background, the starting point of the roundtable is to bring to the forefront main features of platform-based gig work as carried out within the specific industrial relations, as well as institutional and social context in Europe’s post-socialist periphery. Invited researchers, journalists, activists and artists engaged with this topic will participate in a conversation that will map out key questions and methods of dealing with the platform-based gig work in the CEE region. They will share their methodologies of research, art and militancy that might help to explain the discrepancy between the platform companies’ promises and the realities of the employment they provide, the technology that enables it, and, often makes it socially acceptable or regulated (“the new normal”).

Talking about their engagement and spelling out new challenges and opportunities for research, media work, and politics that platform-based gig work creates, we hope to be able to get a structured discussion, sharing experiences, best practices and shared concerns for labour conditions and labour organising.

The discussion is a closing-event to the “Gig work in CEE’s platform economy” article series that ELMO member platforms have carried out in May in honour of the international labour day, May 1st and May as a month dedicated to workers’ struggles. All English language articles, with special focus on Croatian and Hungarian delivery workers, as well as Serbian platform work are available on LeftEast’s website:
https://lefteast.org/tag/gig-work/

To access the texts in local languages, open each article for further links.